Kira Kira takes a maximum of just 8 guests, making her ideal for those seeking a more personal experience.

With kayaks and snorkelling equipment, plus fun land missions; she is the second lowest cost raja ampat liveaboard around.

Tours Raja Ampat at: October – April. (Tours other parts of Indonesia for rest of year). The Kira Kira runs all inclusive itineraries that feature the very best dive sites of north, south and central Raja Ampat, all in the same trip.

This allows guests to fully appreciate the sheer scope of marine biodiversity found here as they experience wall, deep, night, cave and drift dives in this mysterious and seldom visited region.

Everything from turtles to reef sharks, pgymy sea horses to nudibranch, manta rays to dugong and all else in between can be encountered, more often than not among a plethora of vibrant coral that is teeming with reef fish.

With beach visits, viewpoint treks, kayaking and snorkelling  – plus even a BBQ on a deserted beach beneath the stars, this is also a good option for groups with non-divers.

She caters to a maximum of just 8 guests in 4 private cabins to ensure a more personalised service. Three of the cabins are twins, whilst one is a rooftop double cabin  with amazing panoramic views.

There are two shared bathrooms and each cabin has wardrobes and plenty of storage space.

Guests can soak in some rays on the sundeck or laze around on the open air lounge with stunning views and an icy beer.

The food is a combination of freshly cooked Indonesian and Western meals – plus the catch of the day! 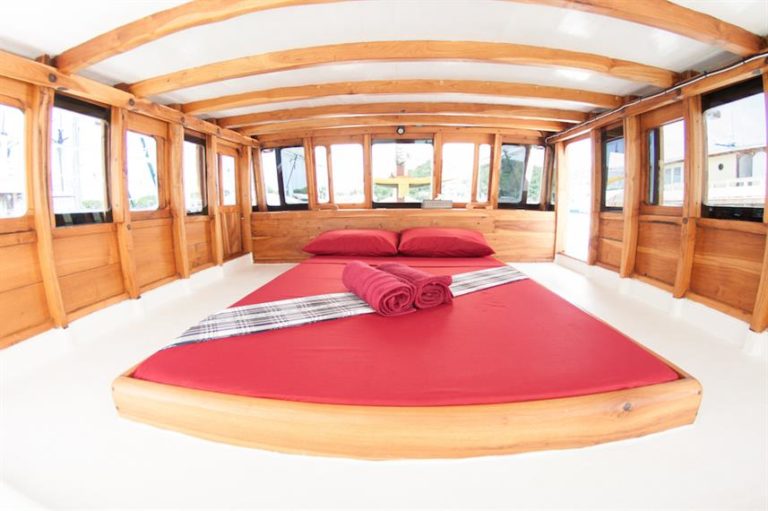 Alex VNew Zealand
Read More
"We had an absolutely amazing time on board the Kira Kira. Clare and Fandi really made the trip, always felt safe and enjoyed every minute. Best holiday we’ve ever had. Diving was great, saw a huge array of marine life. The boat itself fairly basic but had everything we wanted. I cannot thank you enough Clare and crew for a truly wonderful experience that we will never forget".
James MUnited Kingdom
Read More
"Food, beautiful scenery, lively group and friendly staff and crew made a great trip".
Jose NAustralia
Read More
"The crew were always smiling and eager to help you with your gear, the dive guides were very informative and patient, the cooking crew accommodated for my dietary needs perfectly, connecting with the other like minded guests especially during sunsets was truly memorable, and the dive spots were absolutely incredible! Thanks for the great experience".
Previous
Next William B from the United States said:

“There were many highlights! Our dives on sites like Magic Mountain, Four Kings, and Blue Magic were probably the greatest of my life.

I will never forget the sense of action and energy at these sites as tens of thousands of fish surrounded us, sometimes obscuring our view, sometimes producing a noise like underwater thunder when massed schools (silversides, fusiliers) would react as one to the predatory sallies by trevallies and jacks.

Nearly as amazing were the numbers and colors of the sea fans, soft corals, and sponges (especially at the Misool sites).

The topside scenery of jagged, rainforest covered, limestone islands was nearly as awesome as the diving, especially when we took sidetrips into the winding channels and shallow lagoons separating some of the islands.

It was incredible to wake up in the morning in a sparsely inhabited wild place with the only sound being the dawn chorus of the birds! The Kira Kira itself was nothing fancy – no air conditioned cabins, and no frills.

But there were plenty of comfortable bean bags on the shaded upper deck to lie down on while waiting for the next dive – or to sleep on during clear starlight nights.

The meals cooked for us by culinary genius Muly were some of the finest I have ever eaten in Indonesia. The 8 guests, 5 crew, and 2 divemasters quickly established an easy rapport as we moved from one amazing site to another.

Alex and Claire were wonderful underwater guides, showing us pygmy seahorses, mushroom coral pipefish and other macro wonders, while keeping an eye out on the blue for passing tunas and sharks and always making our safety their highest priority.